Here is a short video that addresses the Future tense, and the Conditional.  The first 10 minutes and 30 seconds addresses the Future Tense.
Future Tense Practice
Future tense is used to speak about events that will or are going to happen in the future.  There are two ways to refer to future events.
(1) The immediate future can be formed by using the modal construction ir a + infinitive (to be going to....).

The future tense is formed by using the infinitive form of the verb and using the endings in the chart below.  Notice that for this tense, it does not matter if the verb is an -ar, -er, or -ir verb, they all use the same endings. These endings are simply placed on the end of the infinitive.
Example:   Yo buscaré

Here are more examples of its use and their translations.

There are some irregularities among the most common verbs.  Several have modifications in the infinitive; two verbs use an old form of the infinitive.  All verbs use the same endings seen above. 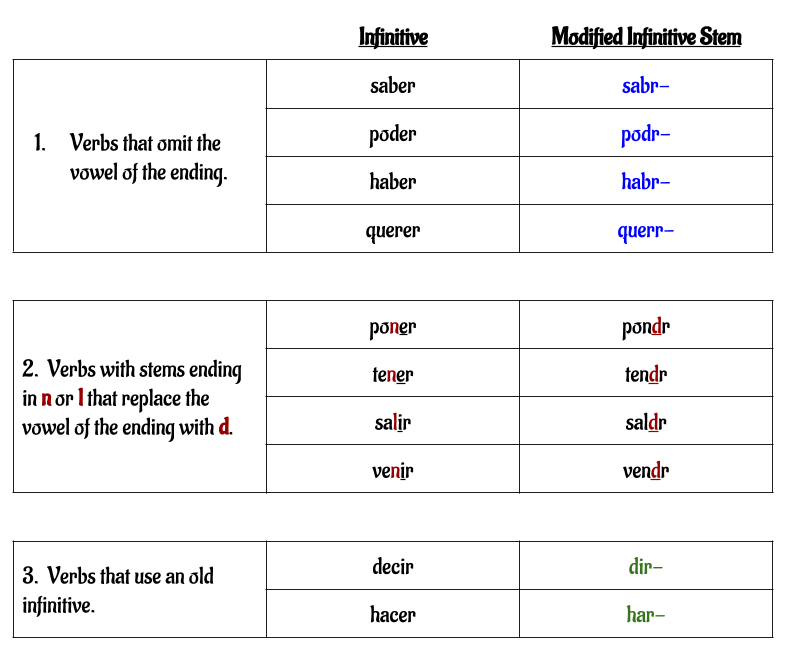 Here are some examples of these verbs in their conjugated forms and translations.
**Interesting Note:
Spanish future translates English will to indicate simple future action, but querer is needed to show willingness, if you want to ask someone to do something.