GUSTAR and other verbs like it are significantly different than the regular verbs that students encounter in Spanish.  The normal sentence structure of a sentence is such:

Here are a couple of examples in English of how we use "like" in a phrase.
In English it is correct to have a Subject liking a direct object, but in Spanish... this does not occur!  In Spanish a different construction is used.  The sentence order looks more like this:
Here are some English sentences and what they become in Spanish, if we were to translate them as they are written.  They still make sense, though in modern English it would sound odd.

A nosotros nos gustan las uvas.
English: We like the grapes.
Spanish: The Grapes are pleasing to us.

A ella le gusta la blusa roja.
English: She likes the red blouse.
Spanish: The red blouse is pleasing to her.

What you need to understand here is both of these sentences mean the same thing, they are just expressed differently.

Now, to translate those sentences into Spanish we use the 4 STEPS for using the verb GUSTAR.

STEP 1 - We use the preposition "a" before the pronouns or names that are doing the liking.

STEP 2 - This step is optional if you DON'T like something, this is where you enter NO.

STEP 4 - This involves the verb GUSTAR.  Typically you will use only two of the conjugated forms: GUSTA or GUSTAN (both in the 3rd person).  Which one you use will be determined by the noun(s) or verb that comes right after it.  Basically, whatever is being liked will determine the conjugation of the verb because it is the subject that is pleasing the person.
Below is a flow chart to demonstrate how the steps come together in a more visual manner. 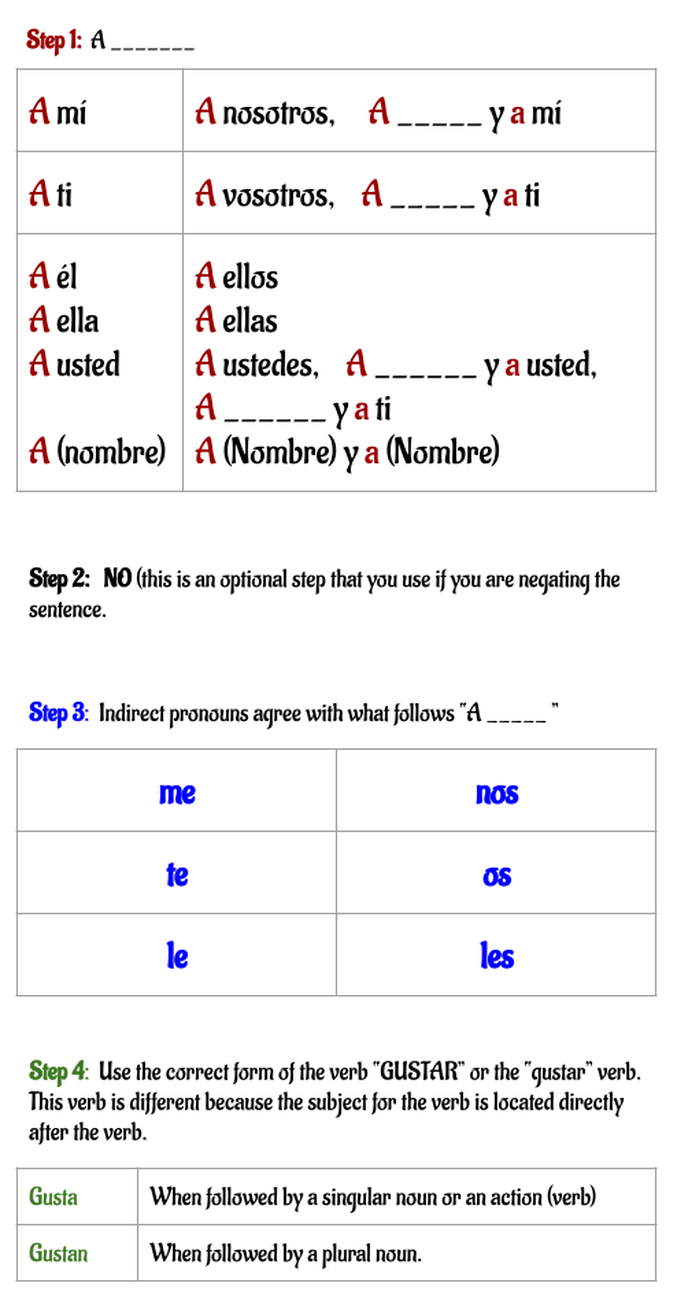 English:  I like the red car.
Spanish:  A mí me gusta el coche rojo.

As you can see, regardless of the indirect object pronoun that comes before the verb GUSTAR, there are only two forms it will take, GUSTA or GUSTAN.

A mí me gusta correr en la mañana.
I like to run in the morning.

A nosotros nos gustan las uvas.
We like grapes.

A él no le gustan los libros grandes.
He does not like the big books.

A los estudiantes no les gusta el examen.
The students don't like the test.

There are more verbs that grammatically function like the verb GUSTAR.  They will follow the same steps, the only thing that changes is the meaning of what you are saying.  Here is a short list of those verbs that you can use to communicate, if you don't just want to say "like" all the time.
Below are flashcards to help you memorize the GUSTAR verbs.  there are more, but we are only going to focus on these ones.
Return to Unit 4