Here is part 2 for the Preterit, that addresses the Stem-changers, Spell Changers and the Irregular verbs in the preterit.

All of the stem changers still use the Regular Preterit endings, only they have a spell change.  As is indicated in the image below, the verbs that have a stem-change are those that are 1) Stem-change in the present tense and 2) are -IR verbs.  The other verbs are end with -AR and -ER that are stem-changers in the present tense, will NOT stem change in the Preterit.  They will follow regular verb rules... except those that fall under the category of the Irregular Preterit verbs. (see explanation below)

There are two types of spell changes we will deal with in the Preterit.  The first is with AR verbs and this change happens because of the relationship between vowels and the consonants.   Recall that in Spanish "G" will make the hard sound-like the G in "goat"-with the vowels A, O, and U.  But, it makes the smooth "G" sound, like an "H" in English, when followed by the vowels E or I.   Likewise "C" has the same phonetic changes - C with A, O, or U will make it hard-like the [k] "Cat"-and C becomes smooth with E or I-like the [s] in "Cinema".
Because the "Yo" form for the -AR Preterit is a stressed "E", the following changes occur, as is indicated in the image below.

Unlike the present tense, the irregulars for the preterit change their stem entirely, AND they have their own verb endings, separate from the other endings.  There is no real method or pattern to recognizing the verbs that are irregular in the preterit other than memorizing them as they are crossed through experience with the language.
Note that the endings for the irregulars shares the endings from the -AR and -ER/-IR charts, and there are no accents in the 1st and 3rd Person Singular. 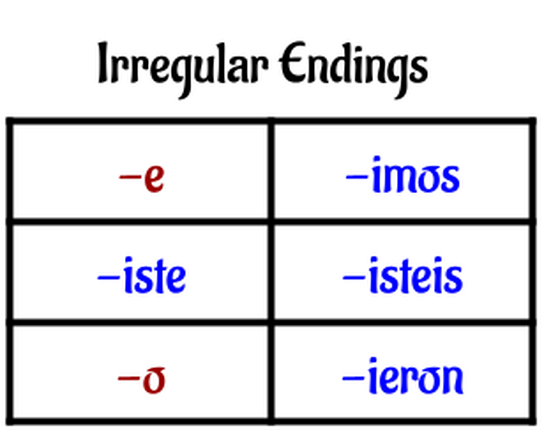 Also keep in mind when conjugating the verb HACER, there is a spell change in the 3rd person singular because of phonetic interaction of the vowel "O" with the consonant "C".  See the conjugation chart below.

These four essential verbs don't fit into any of the other 4 categories and are "different" for their own reasons.  Note that these 4 verbs DO NOT have accents.  You will only have to worry about accents with regulars, spell changers, and stem changers.
​*The only irregular aspect to this verb is NO ACCENTS, the endings are actually normal.

Notice these forms are strange, but we are used to SER being weird.

*Notice context matters in telling the difference between fue in the following two sentences.

Closing thoughts on the Preterite tense

There are five parts/sections/concepts to study know if you want to be competent with communicating in the Preterite (simple past) tense.
Here you can practice to learn and memorize the verb conjugations through StudySpanish.com. Understand that "Orthographic" refers to the Spell changing verbs.