Here is an instructional video addressing the Formal Commands by Sr. Shane Williams. Take notes and compare it with the notes below to ensure that you have all the important information. ​

Moods in Spanish and English

For some basic background, it is important to understand that in language there are not only different tenses to work with, but also different Moods.  Throughout Spanish 1-3 you have been dealing with what is called the INDICATIVE Mood.

What is a MOOD?  A mood is the form the verb takes to show how it is to be regarded (ie. as a fact, a command, a wish, an uncertainty)

INDICATIVE Mood is a verb form that makes a statement of a fact or a question.  This can happen in any tense.
​Examples:
In each one of these examples, something is being declared or made out to be a fact.  The only thing that changes is WHEN that event takes place, the tense.

Since the Indicative Mood has already been addressed, we are going to only address the IMPERATIVE Mood or Commands here.
First it is important to understand the role of commands in language.  A command gives a directive.  It either orders someone to do something, or instructs someone how to do something.  In English, this is simply done by using just the verb:   to go --> Go.       to speak -->  Speak.
​Examples:
So, how do we go about forming the Formal Commands?  This is primarily for Usted, Ustedes and Nosotros.

Here are the three basic steps: 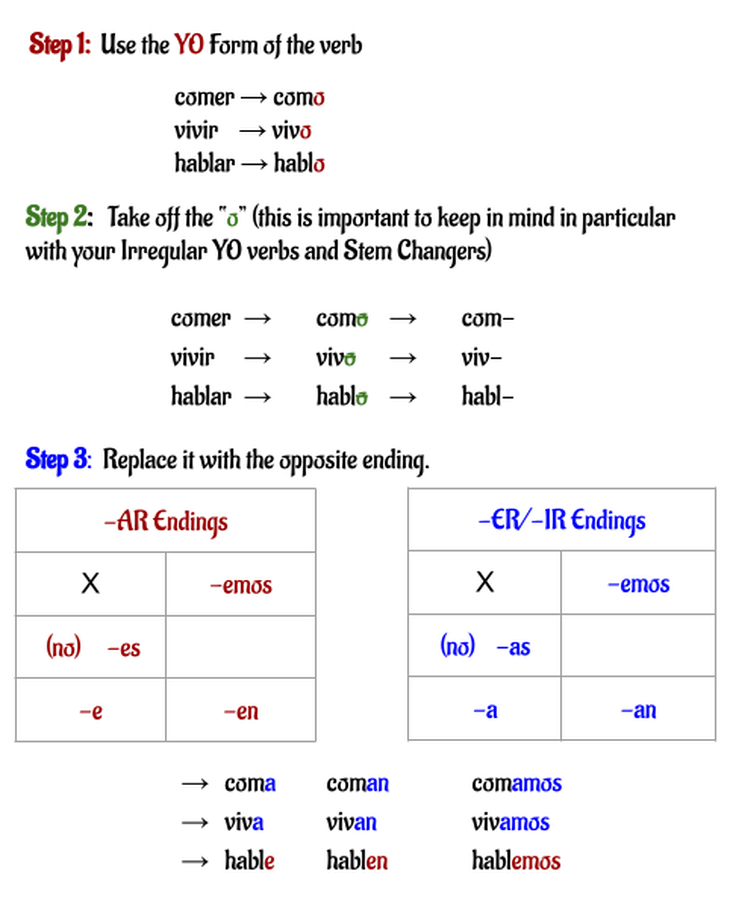 There are 5 groups of verbs you need to be aware of when working with Commands in Spanish.

This group can be just as easy to remember as the regular verbs, if you can remember the verbs that have an irregular YO form.  It is important to recognize that they will have that same form for all of the Formal Commands.  Here are some examples below.